Well refined, Ancient  Indian culture has been under attack from Western and middle western schools of thought for a long time now, and these attacks are now turning into ideological battles. These well planned attacks are trying to portray our advanced historical heritage as a primitive one and destroy our belief in the richness and our reverence of our own culture. Some cultures developed in uncivilized and primitive nomadic lands are trying to revert us back to the same primitive stage from the lofty dais we had traditionally occupied, by tempting our youth with razzle dazzle. 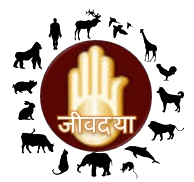 These schools of thought confuse our youth by giving falsified messages of equality, socialism, love and brotherhood in their own cultures, which actually are completely absent in their cultures. But all these qualities arise from the root of non violence. Non violence and compassion to all living beings is the criterion to assess the depth of love in any person.

The Indian soil has always been rich in our sacred "saatvik" principles of mercy and non-violence. Indian philosophy has always condemned meat consumption / gambling / drinking and other such evils as undesirable, and punishable. Acceptance of meat eating is clear acceptance of violence in day to day life without even a second thought. Such schools of thought can never stand eye to eye before the high principles of non violent cultures. Vegetarianism is synonymous to civility and culture of any society. All attacks on the supreme heritage of non-violence are bound to come before a fall. We have the unbeatable armor of nonviolence protecting our heritage, which no ill intention-ed and veiled attacks can cut through.

These principles of mercy and compassion can NOT be met at an equal level by cultures based on violence and hatred, with instructions to maim, damage and kill any and everyone who comes in the way. Leave aside killing enemies, there are instructions to kill one's own family members and loved one's who disagree with the accepted school of thought, and even destroy non-living things like idols etc revered and worshiped by other societies apart from their own.

But, as soon as we reach the question of compassion to fellow living beings, the actors trying to portray their culture as a non-violent one automatically get silenced and defeated. The nectar of our culture lies in compassion and it directly equates to non-violence. It keeps us rooted in all positive grounds of mercy, and keeps us away from evils like hatred, anger, revenge, fights, anarchy and chaos. Creation and maintenance of a non-violent society necessitates the preservation of the high principles of compassion. Definitely India is capable of preserving the distinguished heritage we have inherited from our ancestors.