I recently received this highly informative article by Shri Ramesh Kumar Dubey through mail. The mail included a request to publicize the enclosed information to the best possible extent. that's the reason I am sharing it on this blog. I Hope it will serve as an eye opener to many a persons who justify meat and blame Yagnyas and other hindu traditions as being wasteful of water and other resources.
.............................................. 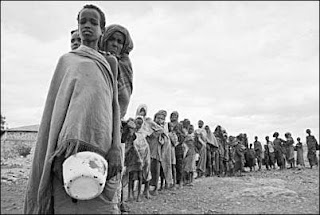 Many reasons have been quoted for the prevalent evils of malnutrition and starvation in our troubled world. But meat consumption is hardly ever discussed as a possible cause. In actual fact, meat consumption is a major cause behind the rapidly increasing challenges faced by us today.

Developing nations blindly emulated the lifestyles of developed ones and even embraced their food habits. With the economic development came a proportional increase in the growth of large scale live stock rearing industry. As an illustration - in 1961, the total meat production in the world was 7.1 tons which increased many fold to 28.4 tons in 2007. The consumption per capita increased twofold in the same period. But the rate of increase was higher in developing nations. In just the past 20 years, the per capita meat consumption has doubled in these countries. For instance, once pork (Pig's meat) was consumed by only the prosperous section of China's population but now almost every Chinese consumes it.

Industrialization and blind copying of western habits has led meat to become a major food item in even those countries where previously meat was a rarely consumed food product. One example of this change in food habits is India. In this process, the traditional foods were neglected. Earlier, Indian villages used to consume pulses and oil-seeds, jaggery etc. to a larger extent and it was a safeguard against malnutrition.

As these healthy food-habits changed, we started taking artificial vitamin and mineral supplements to fulfill our nutritional needs. Earlier, the society had a major right over natural resources but with industrialization, large areas of land came under the control of a small section of rich landlords and industrialists, resulting in a large section of the population being deprived of their share. "Pyaaus" for cool drinking water (शीतल जल के प्याऊ) were replaced by bottled drinking water from multinational companies.

According to the Farm animal reform movement, American consumers attachment to meat is not just harming the environment but also these food habits are fast spreading to the rest of the world. Be it the area of science or technology or fashion, there is a myth spreading in the whole world that whatever America does is the correct thing to be followed.

The mechanization of animal rearing is also a major factor. Historically, animals were reared along with agriculture in a natural way. But now, a large number of animals are forcibly crowded into limited land and fed directly on grain and oil-seeds and even given synthetic hormones to promote unnatural growth and also egg and milk yields. This makes the meat work out cheaper and available to all. This process completely ignores the needs of the concerned animals to a comfortable existence, effectively torturing them from birth to death (or should I say murder?)

This modern meat farming has resulted in large scale use of chemical fertilizers (for growing animal fodder), pesticides, and water. It has led to a steep increase in the production of corn maize and soya beans for feeding the meat supplying animals.

Many people will be surprised to know that a third of the total grain produced in the world is being fed to animals for meat while a large number of humans die of starvation. In America, two thirds of the grain produced is fed to meat animals ... :( ...... Specialists say that if the consumption of meat in the world reduces by just 10%, it could save the lives of 18000 children and 6000 adults who die of starvation. Just imagine !!!
1. Meat production is extremely wasteful of food resources. Producing a kilogram of meat requires 7 kilograms of grain and soy bean. The ratio of conversion from grain to meat wastes 90% of protein, 99% of carbohydrates and 100% fiber.

3. Two third of the cultivable land is presently being used for grazing and fodder and grain production for ANIMAL CONSUMPTION - in turn for meat. as the demand for meat multiplies this will also go up.

4. This will lead to a rise in green house gases - one illustration of the effect of green house effect and global warming was recently seen in the Kedarnath floods in Uttarakhand (India) last year.


Do you eat non-vegetarian food? If so - have you ever thought that you are contributing to global warming? Whatever effect our food has on our personal health, it is a major contributor to environmental pollution. 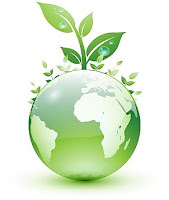 As per the FAO (Food and Agriculture Organization) animal rearing areas contribute to 18% of the green house gases which is higher that the transport sector.

Ever Green forests are being cleared to make space for grazing and animal food. In Latin America, 70% forest land has been converted to animal farms. We know that forests are the lungs of our earth and remove the carbon dioxide to give oxygen. Cutting down trees leads to an increase in the main green house gas - Carbon Di Oxide. The Meat industry waste gives out Nitrous Oxide which is 296 times as effective as carbon dioxide in producing green house effect. Another byproduct of the meat industry is Methane gas which is 23 times as effective as our good old carbon dioxide.

Our (ex) environment minister Jayram Ramesh had said that if the world stops eating beef alone (cow meat) it will bring down global warming to a large extent. We can also add the emissions due to fuel burn in the process of transporting and cooking of meat - remember the cooking of meat takes much more time and fuel than vegetarian food.

The Copenhegan Conference clearly established that reduction of global warming can NOT BE done by laws alone - people have to do their bit to contribute.

The easiest way to contribute is to go vegetarian. ARE WE READY TO DO OUR BIT?
Posted by Shilpa Mehta : शिल्पा मेहता at 9:56 AM 3 comments: